The most iconic Indian state, Rajasthan combines legendary cities with rugged countryside. The principal cities of Jaipur, part of the Golden Triangle, Jodhpur and Udaipur are famed for their palaces; the smaller towns of Jaisalmer for its citadel and Chittagarh for its fort. The Aravalli Hills around Udaipur are covered in woodlands full of wildlife. Jain pilgrims flood to Ranakpur, one of the religion’s holiest sites. India’s most famous natural draw, the Bengal tiger, is frequently sighted at Ranthambore National Park. The luxurious Maharajas’ Express train passes through many of the historic towns. Rajasthan has no direct flights from the UK but is easily reached by rail, road and air from Delhi.

Jodhpur’s old city lies between two architectural wonders,the Mehrangarh Fort and the Umaid Bhawan Palace. The fort has an incredible defensive position on top of a natural cliff with views of the surrounding plains in all directions. Inside the palace, the décor suggests a pleasure-seeking way of life with an elaborate music room, a harem and a Sheesh Mahal bedroom. From Jodhpur, it is possible to travel further west to Jaisalmer or head south into rural Rajasthan before reaching Udaipur.

Founded on two lakes and ringed by the Aravali Hills, Udaipur has the most relaxed atmosphere of any of the cities in Rajasthan. At its heart is the huge City Palace which has been extended by successive Maharajas. From Udaipur, you can return to Delhi or Mumbai or perhaps continue your tour by flying to Goa.

Ranthambore has an excellent location and a great reputation for regular sightings including its most famous occupant – the Bengal Tiger. From October to February, the vegetation is lush; from March onwards, as the temperature starts to rise, the water pools start to dry up giving good viewings. Guests stay outside the park and visit twice a day in the early morning and afternoon for three hours at a time. It can be reached in four hours from Jaipur and is a half day’s train ride from Delhi or Bharatpur which is an hour from Agra.

A walled city of golden sandstone rising up out of the surrounding desert landscape, Jaisalmer is the stuff of Indiana Jones films. Once you enter the citadel, you will find some extraordinary havelis, constructed by wealthy merchants who made their fortunes when Jaisalmer was part of a prosperous trade route. Because of its remote location, those planning to visit Jaisalmer need about four days to allow for travelling time.

Rajasthan, India
Tatler appropriately described this luxury tented jungle camp as "the big cat's whiskers". Indeed these 12 double-bedroom tents offer a truly unique experience. Each tent has its own verandah and is furnished with elegant campaign-style rosewood and teak custom made furniture.
More information

Rajasthan, India
Although in the middle of Rajasthan, there is a very European feel to the Umaid Bhawan, largely due to the fact it was designed by a British architect. The scale of the building however, is of Maharaja proportions.
More information

Rajasthan, India
The Oberoi hotels have an excellent reputation for service and style and Vanyavilas is no exception. Just ten minutes from Ranthambore National Park, there are 25 spacious tents, all with marble baths, wood floors, air-conditioning and high canvas ceilings. Guests can enjoy a dip in the pool or a luxurious massage in between ventures into the park to seek the majestic Royal Bengal Tiger.
More information

Rajasthan, India
This new property in the Great Thar Desert, 30 kilometres from Jaisalmer has 21 luxurious canvas tents, some with private plunge pool and garden.
More information

Rajasthan, India
In a commanding hilltop position, 20 miles from the City Palace of Udaipur, Devigarh is a refreshing alternative to staying in the city. The impressive 18th century marble palace is surrounded by gardens and courtyards; a late 20th century restoration, followed by a recent makeover, transformed the 39 suites into a luxury boutique hotel.
More information

Rajasthan, India
This charming little hotel is the only boutique property in the heart of Jodhpur’s historical walled city. It comprises four red sandstone buildings and offers an interesting mix of tradition and contemporary design.
More information

Rajasthan, India
Renowned as one of India’s most famous and exclusive hotels, the Taj Lake Palace has an enviable location in the middle of Lake Pichola.
More information

Rajasthan, India
Occupying an excellent position on Lake Pichola, all 80 rooms and suites at the Leela face the City Palace, a mile away. The ‘Sheesh Mahal’ restaurant serves local recipes in elegant surroundings on the lake shore, while the wood-panelled bar is a good retreat on cooler evenings.
More information

Rajasthan, India
Set on the opposite bank of Lake Pichola from the City Palace, Udaivilas is designed as a modern palace set in vast landscaped gardens with an elegant black and white swimming pool in the centre.
More information

Rajasthan, India
As Samode Palace is about an hour from central Jaipur, it is best suited to those who have visited the city before or prefer a quiet, rural location. The 43 bedrooms vary in size and design as you would expect from a 300 year old palace.
More information
Holidays

Agra, India
The recommended first time visit to India involves the ‘Golden Triangle’; the combination of the classical Rajput city of Jaipur, Edward Lutyens’ wonderfully designed New Delhi and of course the magnificent splendour of the Taj Mahal.
More information

Featured tours and breaks in 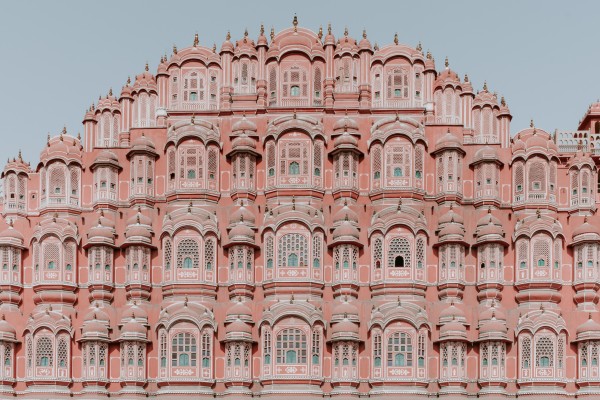 India’s Golden Triangle and the Palaces of Rajasthan

Having previously visited the south of India I decided it was time to take on the north on my latest trip, focussing on the ‘Golden Triangle’, encompassing the beautiful Amber Palace and pink…