Arriving in Cape Town after an overnight flight we enjoyed the luxury of being driven in a smart transfer vehicle to our hotel on the V&A waterfront. This is the main hub of the city and a great base from which to visit Robben Island and Table Mountain. Dining in a restaurant recommended by the Kirker team gave us the local knowledge that makes all the difference.

Collecting a hire car we set off for Hermanus stopping first at Boulders Beach to see the thriving penguin colony, then at Gordon’s Bay to admire the view along the beach before arriving in the Overberg. Hermanus is a popular seafront town best known for its whale watching from September to November but we were delighted to spot a few southern right whales from the shore under the late summer sun in March when the town has a more relaxed feel.

The short drive from Hermanus to Franschhoek was a real surprise for us. Crossing the Franschhoek Pass the impressive view over the undulating valley below improved by the minute as we approached the town. The countryside resembles Tuscany or Provence and the vines here – at their finest during harvest time in February and March – produce rivals to anything in Europe. There are many fantastic wine farms open for tastings and a fine array of restaurants in each town.

Circling Table Mountain on our ascent from Cape Town with a fine Pinotage in hand, we vowed to return as soon as possible. 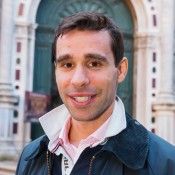 Ignacio joined Kirker in 2005 and has great knowledge of Spain - his parents live in Andalucia. In addition, he has specialist knowledge of many Kirker destinations including cities such as Paris, Berlin and Venice, and more far-flung regions including Oman and Southern Africa.

Ignacio - or 'Nacho' to his colleagues - is passionate about his native Spain, and enjoys sharing his local knowledge of Andalucia in particular. He is also a Southern Africa specialist, with extensive experience creating carefully-planned itineraries to this region.