The golden stretch of Mediterranean coastline, the playground for the fashionable in the 1920s, is again popular with discerning travellers looking for a year round destination with a hint of glamour, a wonderful climate and some outstanding food. An astonishing number of great artists started to arrive in the 1880’s as word of the beguiling light and beauty of the region spread. Monet, Matisse, Leger, Renoir, Chagall, Picasso and Dufy all came here and now, because of their legacy, there is a wonderful range of galleries and museums to explore throughout the Côte d’Azur.

Juan-les-Pins made its name in the ‘swing’ era, when the well-heeled from Europe and America arrived here to try their luck at the casino and to enjoy the vibrant atmosphere. Its popularity has never waned since those heady days and its exotic pine trees and wonderful sandy beaches make it one of the most attractive towns on the Côte d’Azur.

Perched on a narrow spur between two steep valleys, Vence is a mediaeval fortified village. Its breathtaking views and maze of picturesque streets have lured renowned artists and it is home to many galleries, studios and museums.

One of the oldest mediaeval towns on the French Riviera, famous for its modern and contemporary museums and galleries.

This beautiful mediaeval village stands dramatically at 1,400 feet above sea level on the Grand Corniche between Nice and Monaco.

This quiet mediaeval village is located above the main road from Nice airport to Cannes and is a world away from the glitz and glamour of the seaside resorts. A source of inspiration for numerous artists and writers, the village is a maze of cobbled alleyways and shady squares and is dominated by the magnificent Château Grimaldi with its outstanding painted Baroque ceiling and contemporary art exhibitions.

This stunning mediaeval village is set on a hill above Cannes and was the home of Pablo Picasso whose influence encouraged many artists to settle here. In recent years it has become one of the gastronomic centres of France.

The peninsula of Cap-Ferrat has been the playground of the wealthy since the 19th century and is now one of the quieter parts of the French Riviera. A series of seaside paths make it possible to walk around the Cap and you can reach Beaulieu-sur-Mer in 30 minutes on foot. A visit to Beatrice Ephrussi de Rothschild’s elegant seaside villa with its wonderful collection of tapestries, furniture, porcelain and paintings is a must.

Quieter, more sedate and definitely more affordable than Monaco, its glamorous neighbour, the seaside town of Menton is the last port of call before you cross the border into Italy. Protected by surrounding mountains, the town benefits from a superb climate and has many exotic gardens. The mediaeval centre is defined by steep, cobbled alleyways that lead down to the seafront. The Jean Cocteau Museum is well worth a visit.

Located on a beautiful horseshoe shaped bay between Nice and Monte Carlo, this is one of the most charming and authentic towns on the Côte d’Azur. The atmospheric old town with its terracotta roofs and narrow cobbled streets dates from the 12th century. Don’t miss the Chapelle St-Pierre with its frescoes by Cocteau, or the restored citadel with four museums within the walls. The town has three beaches and is on the train line that links Cannes with Nice, Monaco and Menton.

Highly Recommended
Cote d'Azur, France
This beautiful hotel, imaginatively converted from an 18th century farmhouse is located close to the centre of the medieval village. It is set on a series of terraces in a mature and tranquil park, has some wonderful views and offers exceptional cuisine.
More information

Highly Recommended
Cote d'Azur, France
Perched against the rocks in the village of Eze, 400 metres above sea level, the Château de la Chèvre d’Or has the most spectacular views imaginable. There are 43 bedrooms which are scattered throughout the village and terraced gardens which are filled with flowers and offer countless spots to relax.
More information

Cote d'Azur, France
In the 1920s, this delightful villa was the private home of F. Scott Fitzgerald and his wife Zelda who did much to transform what was a sleepy fishing village into the glamorous haven that Juan-les-Pins is today. It opened as a hotel in 1929 after being bought by the Estene family who still own and run it today.
More information

Cote d'Azur, France
Located a short walk from the main square where the locals indulge their passion for boule, this historic residence forms part of the stone walls of the village and dates from the 13th century. After a comprehensive restoration overseen by Swedish owner, Frida Ivarsson, the hotel opened in 2012 and has already established a great reputation.
More information

Cote d'Azur, France
This superb Relais & Châteaux hotel is located in the hills outside Vence and with spectacular views towards the Mediterranean. This was once the former residence of the Knights Templar and is renowned as one of the most historical addresses in southern France.
More information

Cote d'Azur, France
Reopened in 2021 following an ambitious renovation programme, Le Mas de Pierre is once again one of the finest luxury hotels in the South of France. A member of Relais & Chateaux, it is set in nearly 20 acres of gardens in a peaceful setting just three kilometres from the picturesque village – the hotel offers a complimentary shuttle service into St. Paul-de-Vence.
More information

Cote d'Azur, France
Located on the edge of a pine grove at the entrance to the Cap d’Antibes, the Juana is a beautiful, small hotel with an Art Deco façade. Although the area is renowned for its glitz and glamour, the Juana has a private, civilised atmosphere that gives it an oasis-like feel.
More information

Cote d'Azur, France
This bright, modern hotel is located on Garavan Bay, 100 metres from the beach and a 10 minute walk past the town’s two marinas to the atmospheric old town.
More information

Cote d'Azur, France
This elegant hotel stands at the entrance to St. Jean-Cap-Ferrat and has been a favourite for the affluent since its opening in 1904. It was renovated by renowned hotelier Grace Leo-Andrieu who created a really stylish contemporary feel without compromising the Royal Riviera’s Grande Dame standing.
More information

Cote d'Azur, France
The Hotel Welcome has been a feature of the town for over 100 years and has been owned and run by the Galbois family since 1943. In the 1920’s many artists and writers frequented the property including Jean Cocteau who quoted the hotel in a number of his works and left several sketches which are on display today.
More information
Featured Tours

Gardens of the Riviera

Cote d'Azur, France
There are many great gardens dotted along the Côte d’Azur between St-Jean-Cap-Ferrat and the border with Italy. Along with the artists, many gardeners were drawn to the Riviera, attracted by both its climate and its beauty.
More information

Gardens of the Riviera 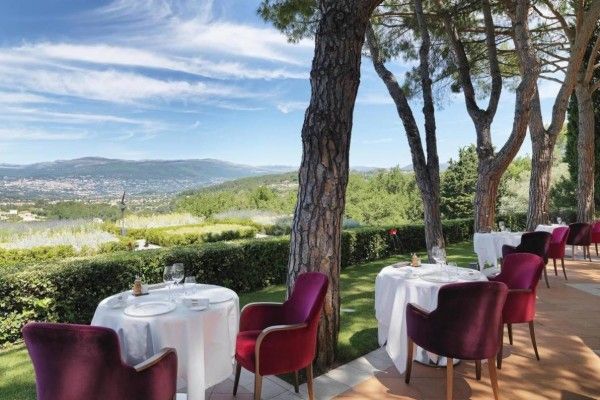 After a busy start of the year my wife and I were looking forward to getting away for a few days. Although we enjoy carefully planning holidays for clients, we still look forward to our own escape now…