The ‘Heel’ of Italy has a rich history and over the years has played host to the Greeks, Romans, Byzantines, Normans and Spanish and, as a result, has many archaeological sites, castles and historic towns. Many of the hotels are converted masserias – fortified, walled farmhouses that were built to defend against invading forces. The region is highly fertile and vegetables are the cornerstone of the cuisine. Wherever you are, you will find simple restaurants serving delicious, rustic dishes at low prices. For those who prefer not to hire a car, we can recommend a tailor-made holiday using a combination of private transfers and local trains – further details on request.

The UNESCO protected Valle d’Itria is a verdant region of vineyards, vegetable farms and olive groves and is characterised by the trulli; the distinctive, bee-hive shaped houses that are unique to central Puglia. As well as archaeological sites such as Egnatia and the spectacular limestone Castellana Caves, there are many exquisite, white-washed hill towns to explore including Alberobello, Ostuni and Locorotondo.

The region’s main town since the Middle Ages, Martina Franca lies at the heart of the Valle d’Itria and has a beautifully preserved old town encircled by its ramparts. With over 20 palaces and 15 churches there is much fine architecture to admire in both Baroque and Rococo styles. The villages of Alberobello and Locorotondo are close by and the drive to both the Adriatic and Ionian coasts takes just 30 minutes.

Taking its names from the alleyways which wind in concentric circles up the hill to the central piazza, Locorotondo is a pretty town in the heart of the Valle d’Itria. Unspoilt, friendly and laidback, it is completely white-washed save for the odd brightly coloured letter box or the elaborate façade of a Baroque palace. Often overlooked in favour of Alberobello, its more famous neighbour, this is a wonderful place to spend a few days and experience the traditional lifestyle of the region.

With the Adriatic Sea to the east and the Ionian Sea to the west, the Salentine Peninsula is home to many of Italy’s best sandy beaches and clearest waters. The region also has some beautifully preserved towns such as Taranto, Otranto, Gallipoli and Lecce, a Baroque masterpiece.

Known as the ‘Florence of the South’, Lecce thrived from the 16th to the 18th century when it was embellished with shining limestone monuments in Renaissance, Rococo and Baroque styles. With so many beautifully preserved, there is an extraordinary collection of architecture to enjoy including the delicate modelling on the façade of the basilica.

Highly Recommended
Puglia, Italy
Located in the quiet streets of the old town, 300 metres from the basilica, La Fiermontina is an urban resort offering a calm, oasis-like atmosphere.
More information

Puglia, Italy
‘Albergo Diffuso’, meaning a scattered or spread-out hotel, refers to an increasingly popular form of accommodation whereby guests stay in a series of apartments dotted throughout a characterful town, and experience living in close contact with residents rather than tourists.
More information

Puglia, Italy
Opening in May 2022, the newest property from our friends at Baglioni Hotels, Masseria Muzza brings a luxurious retreat to the deep south of Puglia. Located just outside Otranto, a historic city on the Adriatic Coast, closer to Corfu than to Naples, it is a 17th-century building surrounded by olive groves and the Salento sea.
More information

Puglia, Italy
One of the few hotels in Puglia with direct access to a sandy beach, Canne Bianche is located close to Torre Canne. Recently opened, the architecture of the building reflects the typical light-filled, whitewashed houses that define the region and makes the most of the wonderful Adriatic views.
More information

Puglia, Italy
Built in the 16th century as a watch tower, the Coccaro opened as a resort hotel in 2002 and is 10 minutes’ drive from the town of Fasano. The restoration has preserved all of the Masseria’s rustic character and it is a very atmospheric place to stay.
More information

Puglia, Italy
This renovated, whitewashed masseria is just a few kilometers from the historic port of Otranto and one hour from Brindisi airport; the sandy beaches of the Baia dei Turchi are a short drive away.
More information

Puglia, Italy
Built by the architect Mauro Manieri in the 18th century, the Patria Palace has a wonderful location in a small square opposite the elaborate Baroque façade of the Santa Croce basilica.
More information

Puglia, Italy
One of Puglia’s many ancient masserie (fortified farmhouses), Torre Maizza has recently been acquired by Rocco Forte and reopens in May 2019 after a full renovation. Designed by Olga Polizzi, the 40 bedrooms combine the group’s signature contemporary style with a collection of local objets d’art – all our spacious and many have vaulted ceilings and private terraces.
More information

Puglia, Italy
This small, privately-owned hotel is located a few minutes’ by taxi from the old town and sits amongst mature gardens.
More information
Featured Tours

Puglia - A Land of Conquest

Puglia, Italy
Puglia, the ‘heel’ of Italy, is an ancient land that produces more olive oil and wine than any other region of Italy. It is highly fertile despite its harsh limestone landscape typical of the Mezzogiorno. It was this remote corner of the peninsula that the Normans conquered in the 11th century, dominating the entire south of Italy and the island of Sicily by the mid-12th century.
More information

Featured tours and breaks in Puglia

Puglia - A Land of Conquest 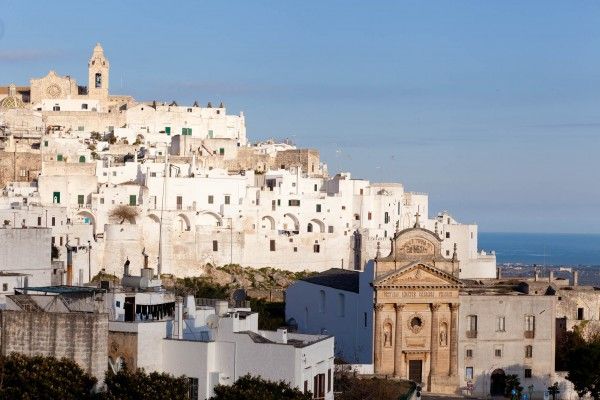 The Puglia region (referred to often as the heel of Italy’s “boot”) remains a relatively unexplored part of the country. I certainly found this one of its charms, together with characterful…