Located in the deep south of Spain, Andalucia is a region of contrasts. Ancient cities showcase iconic Moorish design in the shape of lavish palaces and mosques which display the legacy of centuries of Islamic domination. But this beautiful area has so much more to offer- with beautiful beaches, fertile plains and the dramatic peaks of the Sierra Nevada mountain range. Kirker’s Andalucian Trilogy allows you to explore the three most prominent cities Andalucia has to offer, in effortless fashion. Seville, the Andalucian capital, is the home of Carmen and Figaro – its old town of Santa Cruz consists of a labyrinth of cobbled streets lined with orange trees, and centred around the Alcazar, one of the most beautiful royal palaces in Spain. Cordoba, the second destination on our list, is a myriad of cobbled streets and courtyards with the spectacular mosque which is so large its conceals a Christian cathedral inside. This extraordinary example of Moorish architecture is guaranteed to take your breath away – but there is more to come. Granada, the final component of the trilogy, is home to the pinnacle of Moorish architecture – the Alhambra Palace and its Generalife Gardens, which surround the palace itself with delicate avenues, elegant planting and gentle pools and fountains. Here you can relax and enjoy the spectacular views over the city and the Sierra Nevada mountains in the distance.

This fine hotel consists of two separate buildings, the original Palacio which dates back to the 19th Century and is set around a beautiful stone staircase and a contrasting, strikingly modern new building with a lattice made of alabaster forming part of the facade.

Located in the centre of town, close to the convents of San Leandro and Santa Maria de Jesus, the Rey de Baeza is an extremely appealing and highly individual hotel.

Located in the heart of the city centre, the building dates back to the 16th Century.

On my first day in Cordoba I awoke early in the morning to visit the Mezquita. Since learning about its turbulent history I have been keen to visit and see this remarkable feat of architecture for myself. The religious control of the building has been contested over the centuries, resulting in a Cathedral being built inside a Mosque, the roof of which rested on over 1,200 iconic red and white… 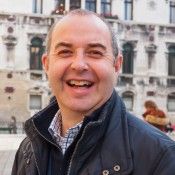 Ricky has been with Kirker since 1989 and there are not many destinations in our brochures that he has not visited. With family in Valencia as well as Holland, he is an expert on Spain and Portugal in particular, and has also travelled to South Africa, Morocco and many regions of France.

As Product Manager for Spain, France, Portugal and Morocco he has in-depth knowledge of all our hotels in these countries, and spends much time each year reaseraching and visiting new properties.