Described by the 11th Duke of Devonshire as ‘the jewel in Eastbourne’s splendid crown’, The Grand enjoys a majestic position in this elegant seaside resort, which was developed by the Cavendish family in the late 19th century and is the perfect home for our new exclusive music festival. It is a benchmark of comfort and style from that romantic period, more reminiscent of the grand hotels of the capitals of central Europe than of the English coast.

Music has always been a central feature of life at The Grand: Debussy, Elgar, Dame Nellie Melba and many others stayed at the hotel.  Kirker is delighted to introduce guests to La Serenissima, the UK’s leading interpreters of Italian baroque music, in a series of intimate concerts highlighting a network of composers inspired by and linked to Vivaldi.

The 5 star Grand Hotel overlooks the English Channel, a short walk from the centre of Eastbourne and from Devonshire Park and the Towner Art Gallery. It has spacious public lounges, restaurants and bars, and an impressive spa with indoor pool, gym, solarium and treatment rooms. Free use of the spa’s facilities is included. Our concerts will be held in the Compton Room. Bedrooms are comfortable and well appointed. You can choose between an inland facing room or a room with a sea view.

A certain M. et Mme. Claude Debussy checked into the Grand Hotel on 24 July 1905 but in truth the guests were M. Debussy and his mistress, Emma Bardac, not his wife. Emma was an accomplished singer and married to a rich financier. They had left Paris to avoid the final judgement in Debussy’s divorce from the real Mme. Debussy. News of the divorce settlement, which went against the composer, together with acerbic observations from the judge, came through to them on 2 August. The couple stayed on in Eastbourne until 30 August. Debussy corrected the score of his masterpiece, La mer, while at the Grand – a perfect location for such work. His stay in Eastbourne played no part in the history of La mer but while in Eastbourne he did compose ‘Reflets dans  l’eau’, part of his Images pour piano. 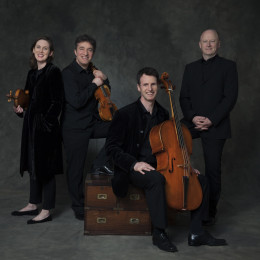 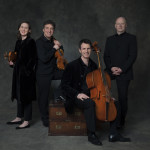 La Serenissima is a UK period-instrument ensemble presenting ground-breaking programmes for varying forces – from works written for 2 musicians, to a complete opera cast. The group is acclaimed for its commitment to unearthing the musical gems of 18th-century Venice and connected composers. Founded in 1994 by Adrian Chandler while he was still a student at the Royal College of Music, La Serenissima is recognised as the UK’s leading exponents of the music of Vivaldi. The ensemble has given recent performances at the Buxton International Festival, London Festival of Baroque Music and at Valletta International Festival of Baroque Music and during 2021/22 will give a series of residency concerts at Wigmore Hall. His Excellency The Ambassador of Italy to the United Kingdom is the group’s Patron. 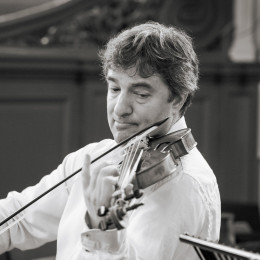 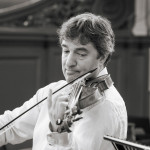 Born on Merseyside in 1974, Adrian Chandler is recognised internationally as a leading interpreter of Italian baroque music with an ‘avant-garde approach that would have awed Hendrix’ (The Guardian). Adrian was introduced to Vivaldi’s The Four Seasons at the age of ten via a recording by Iona Brown and the Academy of St Martin in the Fields: the experience resulted in a lifetime’s dedication to Italian baroque music. Adrian founded La Serenissima in 1994 whilst still a student at the Royal College of Music.

Known for his determination to share knowledge and a passion for great baroque music – whether celebrated, under-performed or unknown – Adrian’s commitment to broadening musical horizons is matched only by his formidable technique and powerful expression as a violinist. His charismatic addresses to audiences in concert and writing have been widely remarked on and he’s been praised by Gramophone Magazine for the ethos he has created: ‘a scholarly attitude to programming and performance style which is yet worn with light grace’.

Adrian was awarded a 3-year Arts and Humanities Research Council fellowship in 2006 at Southampton University to chart the development of the North Italian violin concerto 1690-1740; he subsequently held a 2-year post there as Turner Sims Professor.

The arrival of the eighteenth century heralded a huge advance in the playing techniques of the violin and cello.  Their burgeoning popularity oversaw the demise of the viol and cornetto and helped to form the backbone of a new ensemble: the orchestra.

In France, where violin literature was still somewhat embryonic, two young violinists, Leclair and Guillemain set off for Turin to study with the virtuoso Giovanni Battista Somis, returning home with an arsenal of violin tricks and fancies.  They were widely recognised as being two of France’s finest violinists, and both supplied the amateur market with some astonishingly difficult sonatas and concertos.  Our first concert presents two sonatas by both Leclair and Guillemain for two violins sans basse, as well as two by Vivaldi, (Somis’ teacher), that were written to be played with his father on a tour of ‘Germania’.

Although the compositional styles of Leclair and Guillemain display plenty of Vivaldian elements, their playing style was almost certainly of a sweeter nature than that for which the Italians were famous.  A celebrated concert took place in Germany where both Leclair and Locatelli played solos; one listener said that Leclair played like an angel, whilst Locatelli played like the devil.

27 February - Italian Fire - The Concerto in Italy and Germany

Vivaldi: Concerto for 4 violins, viola & continuo in B Flat, RV 553

Vivaldi almost single-handedly transformed the concerto from its infancy in the 1690s, to a prototype which composers still use to this day.  German composers in particular were hugely influenced by the Vivaldian concerto;*Bach’s double violin concerto pays homage to Vivaldi, as do the striking concertos for 4 unaccompanied violins by Telemann.  The concerto for 4 violins was a relatively popular – if slightly exotic – scoring, and we present two other examples by Valentini (violinist, poet, composer and painter) and of course, Vivaldi.  Also included is the double violin concerto in G, which was adapted from the G major sonata featured in the first programme.

Vandini: Sonata for cello & continuo in A

Locatelli: Sonata X for violin, cello & continuo in A, Opus 8

The final programme opens with a recently discovered sonata for violin and cello by Vivaldi and closes with a similar work by ‘the devil’, Locatelli.  Also featured are a cello sonata by Vandini, a colleague of both Vivaldi (at the Ospedale della Pietà) and Tartini (at the Basilica del Santo) and the latter’s Devil’s Trill sonata.  Tartini was the composer whose work best spans the gap in virtuosity between Vivaldi and Paganini, and whose style influenced a whole generation of European players who came to study at his famous violin school, the Scuola delle Nazioni.

To add to the esoteric nature of these programmes, we have also included two sonatas for viola d’amore by Ariosti.  Like Vivaldi, he was a priest, and in his day, he was deemed to be a very successful operatic composer, gaining plaudits from composers such as Rameau.  He spent the latter part of his career in London, where it is thought that he also acted as a spy for the French king.

27 April Venice and Beyond - The influence of the Venetian lagoon

Vandini: Sonata for cello & continuo in a

Brescianello: Sonata for 2 violins & continuo in b

Vivaldi: Concerto for recorder, 2 violins & continuo in a, RV 108

The Kirker music festival at The Grand, Eastbourne

A very well organised trip - excellent introductory talks, the hotel was delightful (as was the weather) and we very much enjoyed it all.

The Kirker music festival at The Grand, Eastbourne

I am very grateful that, even with my present limited mobility, Kirker made it possible to enjoy comfortable surroundings and excellent musical experiences - very well-chosen and varied programmes, performed by musicians of the highest calibre.

Music is my passion and La Serenissima, who are one of my favourite ensembles, have brought so much pleasure and joy into my life for many years now.

La Serenissima has both by its recordings and its concerts/recitals given new life deservedly to baroque repertoire which has languished for too long unperformed and neglected; and, by so doing, enriches modern cultural life, broadening experience and furthering horizons. 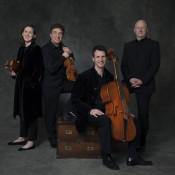 La Serenissima is a UK period-instrument ensemble presenting ground-breaking programmes for varying forces – from works written for 2 musicians, to a complete opera cast. The group is acclaimed for its commitment to unearthing the musical gems of 18th-century Venice and connected composers. Founded in 1994 by Adrian Chandler while he was still a student at the Royal College of Music, La Serenissima is recognised as the UK’s leading exponents of the music of Vivaldi. The ensemble has given recent performances at the Buxton International Festival, London Festival of Baroque Music and at Valletta International Festival of Baroque Music and during 2021/22 will give a series of residency concerts at Wigmore Hall. His Excellency The Ambassador of Italy to the United Kingdom is the group’s Patron.

A very well organised trip - excellent introductory talks, the hotel was delightful (as was the weather) and we very much enjoyed it all.