A Tuscan weekend in Florence and Siena

I hope you enjoy viewing our film documenting the 2013 Kirker Ischia Music Festival. As the person who is fortunate enough to organise and attend them all, I would like to share my own reasons why I think Ischia is such a rewarding week’s holiday.

I have just finished leading one of our opera tours to Vienna and instead of flying home to London I travelled onward to Malta to join the Baroque Music Festival in Valletta. Whilst following the in-flight map I realised we were just about to fly over Ischia, twinkling down there in the Bay of Naples. It seemed strange to be so near and yet so far from a place that I have grown to love so much over the past decade, and this made me realise, quite acutely, how much Ischia means to me in both professional and personal terms.

The popularity of our October Kirker Ischia Music Festival never seems to wane. Almost 500 of our clients have enjoyed the week long chamber music festival each autumn since our first in 2006 and I don’t think it is immodest for me to say that at least 499 of them have had a week of first rate music in a setting of great natural beauty that they will remember for a long while.

Why is it then, that each year, fifty or so people arrive on the island tired and agitated, only to leave again a week later soothed and made serene by the unique qualities of Ischia? It's a question I ask myself every year and I still haven’t found the answer - although thanks to the comments made by Nancy Klein in our film I feel I've got a bit closer to it.

Nancy described Ischia as a "fantasy place" - short but perfect - thank you, Nancy, but what exactly are its fantastic attributes?

The volcanic island of Ischia sits in the Bay of Naples in one of the world's most beautiful expanses of water. From the terraces at the Hotel San Montano, where we stay, we enjoy spectacular views across the Bay. This unrivalled panorama takes in majestic Capri and the neighbouring fishermen’s island of Procida, the looming figure of Mount Vesuvius on the horizon, the city of Naples and a glorious coastline lined with sumptuous villas.

The natural beauty all around would be enough to beguile, but if you take a closer look at the green and gentle terraces of Ischia itself, it appears perfectly formed. There is no sense of the islanders living cheek by jowl and there's not an unsightly dwelling to be found anywhere on the entire island.

Most of this comes as a complete surprise to the first time visitor and although our clients are very well travelled, I can’t recall a single person who had previously been to Ischia. So why had they come? The answer to this is simple - they all wanted to see the glorious house and garden where Sir William and Lady Walton had lived and worked - he composing and she creating one of the world's great gardens, La Mortella. It is great, not because of its grandeur or size, but because it was the fulfilment of one woman's ambition to create a place of exquisite beauty for her husband and friends to enjoy. Today her legacy continues to provide enjoyment to the 80,000 visitors who come here each year - many of whom who would have no idea who the Walton’s were.

I knew Lady Walton well - she always appreciated the support Kirker gave to the Walton Foundation by coming and giving concerts in her house. For her it was not only a source of much needed revenue to keep the dream alive, but she would also come to every single concert – up to eight in a week. She would always sit in the front row, and often remarked that La Mortella came alive in the Kirker week.

Susana Walton died on Sunday the 21st of March 2010. I was on the Isle of Man that day with Simon Rowland-Jones who was on the jury at the Lionel Tertis Viola Competition (Simon plans our music programmes and plays at every Ischia Festival). He told me that of the 60 contestants, more than 40 of them had chosen to play the slow movement from Walton's Viola Concerto as part of their programme. I sent an email to Susana but she never read it as she passed away that very day.

I know she would have been very pleased - her job, as she saw it, was to keep William's legacy and memory alive. She not only did this tirelessly, but by creating La Mortella she also ensured future generations would come to Ischia to see her famous garden - and would leave again knowing more about her husband than herself. It for this reason I shed a tear on the day she died in memory of a very remarkable woman.

Sir William Walton did not write a large volume of music, but we always try to include some of his chamber works each year. In the 2014 music programme we have the guitarist Gary Ryan playing the exquisite Bagatelles written on Ischia for Julian Bream - they've never been included before as they are too difficult for most guitarists to play!

Over the years we've presented so many fine musicians - Felicity Palmer, Sophie Daneman, Stephan Loges, Andrei Bondarenko, Katherine Broderick, Melvyn Tan, the Belcea, the Chilingirian, the Doric and the Sacconi Quartets, Ian Brown, Julius Drake, Andrew Ball, Iain Burnside, the Kungsbacka Trio, Gary Matthewman and of course Simon Rowland-Jones - without whose masterly planning and playing none of these Festivals would have happened.

I spend every summer looking forward to boarding the hydrofoil from Naples to Ischia for my annual pilgrimage to a place resonant with so many personal and musical memories.

I hope you'll join us this year!

A Tuscan weekend in Florence and Siena 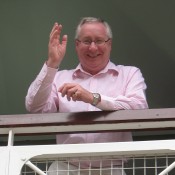 Barry Cheeseman has been the Manager of the Kirker Cultural Tours & Music Holidays programme for over 10 years.

Barry has been an opera lover for more than 40 years and has seen and heard every major singer during this period. He loves the challenges of organising complex arts events and working closely with the musicians. Out of the office, Barry manages to fit in time to organise his own Chamber Music Festival in North Norfolk where he lives