Zurich, Wengen and the Jungfraujoch

I have returned from a trip to Switzerland, a fascinating country which speaks four different languages, and is renowned for its chocolate and its time-keeping – but there is more to the country than the stereotypes suggest. We flew into Zürich, a culturally vibrant city, which is beautifully set at the confluence of a lake and river, surrounded by the magnificent Alps. The city has a lot to offer, and despite its reputation as a business metropolis, it actually has an attractive old town lined with quaint houses in quintessential Germanic style, with colourful shutters and wooden gables, a host of mediaeval spires offering panoramic views of the city, and museums of all different styles. We visited the Kunsthaus, which is one of Zurich’s more renowned galleries, where you will find anything from the Renaissance masters to the French Impressionists and Francis Bacon.

One must also not forget that Zürich is home to one of the best opera houses in Europe, and we can highly recommend a wonderful hotel called the Ambassador a l’Opera, which is just around the corner, located on Lake Zürich. My favourite hotel however, was the Storchen, located right in the heart of the old town, which has recently undergone substantial renovation combining an element of modern design with its original features. The breakfast room overlooks the river Limmat, a lovely way to start the day.

After a few days in Zürich, we travelled by rail to Wengen, and although there were a couple of changes of train on the way, it struck me that as soon as you leave the city, even the local train journeys are scenic in Switzerland, passing through the beautiful countryside, following lakes and skirting mountains with snow on their caps all year round. Wengen is a traditional mountain village which is completely car free, encircled by meadows filled with alpine flowers, beautiful pine forests, and of course, with the back drop of the Jungfrau, Eiger and Mönch mountains. This beautiful village is really a haven all year round.

We took a day excursion up to the Jungfrau, leaving from Wengen by cog railway up to Kleine Scheidegg, the hill station between the Mönch and the Jungfrau. From there the train climbs steeply through various stations until it eventually meanders into and through the Jungfrau itself, where you pause in a cave station. The Jungfraujoch is a saddle between the two mountains where a large complex of tunnels and buildings have been put up, including an observatory which gives the most spectacular panoramic views over the glacier below and the Swiss Alps stretching to the horizon – from there you really do feel as though you are on top of Europe.

Switzerland really was a huge surprise for me, and what struck me most was the diversity of this beautiful country. Yes, Switzerland is not a cheap destination, but it is not as expensive as it is sometimes perceived to be, and with its diversity of music, opera and art in the cities, and beautiful views at every turn, this country would be a mistake to miss out on. 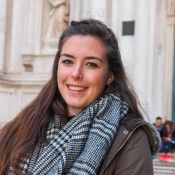 Izzy joined Kirker in 2014 after graduating from Newcastle University with a degree in History of Art and Ancient History, both topics which have fuelled her love of travel.

She has travelled widely including Kenya, Nepal and South East Asia, as well as some of the most fascinating art cities of Europe – highlights include Venice, Florence, Rome and Paris. However, the vibrant city of Berlin, with its exceptional museums and exhilarating nightlife will always remain a personal favourite to which she often returns.